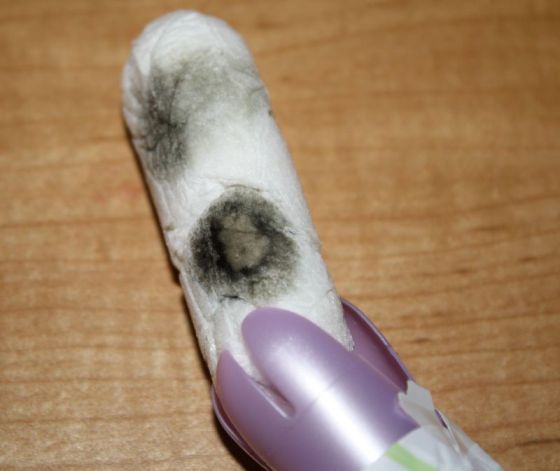 Yes… it is exactly what you think it is (well, probably at least)

Today, an article posted up by a lady seems to be spreading like wildfire throughout the menstrual-interest communities. I’ve seen it posted up in at least 6 menstrual-related sites and uncountable tweets/retweets in my twitter feed.

Since I don’t know the blog owner, I’m not going to risk reposting and running into copyright issues, so if you’re interested in knowing the full story by her, please read it here:

Apparently, the blog owner was about to use a Kotex Security tampon and by chance, she discovered that the tampon had formed mold when accidentally popped the tampon out of the applicator. Given that applicator-tampon users know that the tampon usually goes from inside the applicator directly in the vagina, one would have never seen the mold on the tampon until removal or maybe never if it had been covered by menstrual flow or dropped right into the toilet bowl/wrapped in toilet paper. Now I’m not saying that this type of stuff doesn’t happen with any tampon or to other brands, but certainly when it is publicized like this, it sure as hell gets attention. If you read through some of the comments on the blog entry, you’ll see quite a few individuals who recommended going to awareness groups and the media about this!

If you’re not aware of what effects mold has on humans, here’s a snippet from Wikipedia:

Molds are ubiquitous in nature, and mold spores are a common component of household and workplace dust. However, when mold spores are present in large quantities, they can present a health hazard to humans, potentially causing allergic reactions and respiratory problems.

Some molds also produce mycotoxins that can pose serious health risks to humans and animals. Studies claim that exposure to high levels of mycotoxins can lead to neurological problems and in some cases death. Prolonged exposure, e.g. daily workplace exposure, may be particularly harmful.

Suffice to say, in my opinion, even though I recognize nothing in this world is “really clean” – knowing that the Kotex representative made this sound like a common occurrence really makes me think whether I ought to try even harder to pull my girls off from using tampons – or at the very least – use non-applicator tampons such as O.B. where at least you can get a visual inspection of the tampon before putting it in! I know people who follow my blog know me to be pretty pro-pad, but seriously speaking, at least if mold was forming on a pad, it’d be something you’d notice before it touches sensitive female parts.

I’ve seen saturated tampons, pads, sponges, menstrual cups, cloth pads, etc. and it doesn’t even trigger a reaction from me – but when this picture caught my eyes, I could feel my gag reflexes already. I know this doesn’t exactly affect me in the way it affects tampon-using women, but I don’t think I can ever see tampons the same after seeing this. I know within the menstrual community, it seems like there have been talk of people giving up Kotex-brand tampons, not just the “Security” line of them. Whether or not this will have a severe financial impact is one thing, but a customer lost, whether one or many is less revenue.

Times like these, it makes me really glad bebe doesn’t use tampons. I know I’ll usually leave a few in her drawers just-in-case she ever decides to try or really needs them for something like swimming – but I think I ought to start pulling them out and maybe just gift her a menstrual cup instead! Hell, I think the last tampons I dropped for her were U by Kotex tampons. I’m not saying those particular tampons would encounter the same issue (and yes, I do realize that EVERY product in this world has a chance for ‘defects’ or ‘unforeseen contamination’ but I just can’t accept that risk of her potentially sticking something like that into her vagina and NOT KNOWING. It’s kind of like when you use conventional tampons, you know there is a risk of TSS. Knowing and continuing to use them means you implicitly accept the risk. However, I don’t think it passes through the mind of women that they could potentially be injecting a molded wad of cotton in themselves!

What I can say for sure is that there ARE safer alternatives out there such as menstrual cups and cloth pads which can not only help reduce the likelihood of mold forming (with proper cleaning and storage of course), but a host of other healthy and environmentally-friendly benefits!

I was just about to send a comment response to the blog owner’s entry, but it seems like she has turned comments off for that particular thread.  I wonder if Kimberly-Clark representatives (or lawyers

) caught up with her or perhaps that she just wanted to bring closure to the issue. Nevertheless, I know some people will definitely scrutinize whether they want to continue using Kotex tampons (of any line/series) or tampons all together! I’m definitely going to have a talk with my girls whenever I can get a hold of all of them. Their health is important to me and I’ll have to definitely let my bebe know about this craziness should she ever go down the road of considering tampons! I definitely think I ought to start getting her some non-applicator tampons so she can at least get a visual surface inspection on the damn things!

I seriously hope that they will be, “diligently reviewing our manufacturing process to ensure this problem does not recur.” as they’ve promised, rather than giving that as a canned and politically-correct response. My stash is empty of Kotex products (just by coincidence) now and I think it’s going to take a while before I can get over this. Customer confidence is hard to gain, but easy to lose. Suffice to say, I’m not saying their whole business will collapse or anything because loyal customers, will be loyal customers… and who knows, maybe this incident is just blown out of proportion, but unfortunately with the world of the internet, “news” can travel quite fast… particularly BAD news. But what I do know is I wouldn’t mind investing in emptying out Kotex products from my girls’ cabinets and restocking them with stuff of other brands. Better yet, I can prod some of my girls a bit more to return to the good ol’ world of pads or even try shifting them onto reusables! Maybe in a couple months I’ll look into Kotex products again, but for the time being, it’s going to be pretty hard to get my girls or I back on their brand for a while!

Please see the post made by You ARE Loved @ http://you-are-loved.org/918/kotex-tampon-recall/ – credits to them for passing this information to me via twitter. This is important information and thus, something I felt a need to post up on its own entry.

Since I don’t really have any information more than what’s provided from the media, please read below for an important notice IF you, a) Use Kotex Natural Balance Security Tampons and b) purchased these tampons in/from United States.

This recall is limited to two product SKUs (carton codes), 15063 (18 count) and 15068 (36 count). The tampons were manufactured with a raw material contaminated with a bacterium, Enterobacter sakazakii, which may cause health risks, including vaginal infections, urinary tract infections (UTIs), pelvic inflammatory disease or infections that can be life-threatening.  Women with serious existing illnesses, cancer or immune-compromised conditions, such as HIV, are at increased risk.  There is limited evidence of transfer between individuals with this bacterium.

Consumers should contact a physician immediately if they have used the impacted Kotex Natural Balance* Security® Unscented Tampons Regular Absorbency product and experience unusual vaginal discharge, rash, fever, headache, vomiting or abdominal pains, particularly if they are HIV positive, have AIDS, cancer, an existing serious illness or may be pregnant.

The full recall information may be found here. I urge that should you use these tampons and live in an affected area to take extra care to reference the lot number with the ones shown above. It’s for your own safety and health! If you’re a male and know that your partner or family uses these, please let them know of this potentially life-threatening information. If you’re unsure whether a loved-one uses this product, don’t be shy to provide them with the information anyways as embarrassment or awkwardness doesn’t kill, but dangerous bacteria DOES!